Intervening to help people in danger on the streets

We help people  find emergency care, and have benefited over the years by a continuing  relationship with the professionals who staff Alameda County’s medical  and social services: doctors, nurses and social workers at Highland  Hospital, for instance. The downtown Oakland Mobile Crisis Team responds to requests from the Oakland Police Department, other agencies  and individuals for assistance with mental health evaluations of adults  in the community.  St. Mary’s Center in West Oakland helps place the homeless in housing and provides a Winter Shelter of their own. We often rely on the Oakland Police Department itself in an emergency situation. Other important resources include the Center for Independent Livinga services and advocacy organization run by and for people with disabilities with offices in Oakland and Berkeley; and Operation Dignity, Inc. support services for veteran families, offering transitional and permanent housing as well as a mobile outreach team that is instrumental in helping the homeless vet in a crisis situation.

Care continues for those struggling with mental and physical distress by  assisting them into shelters, and medical facilities like Highland  Hospital and John George Psychiatric Pavilion a psychiatric emergency services department both for voluntary and involuntary  "5150" admissions, with inpatient units for longer term psychiatric holds. Substance abuse programs like Cherry Hill Sobering & Detox Center in nearby San Leandro, are also helpful.

Each person has unique needs

Each person has  unique needs, depending on their individual problem set, and we try to  meet them. Many have mental problems or drug addictions, sometimes both.  Tom, for instance, is a Vietnam vet who is bipolar and evicted three  times; this makes it very difficult for him to find housing when a  background check is performed. Unable to get off the streets he would  periodically spiral into a deep depression and have to be hospitalized  at John George Psychiatric Pavilion.

We were able to find a room in a  house where he stayed for five months, and then another where he stayed  for two more months. His erratic behavior fueled by his occasional drug  use and bipolar problems has made a stable living situation difficult  for him to achieve. He has now moved to San Francisco and we haven’t  heard from him in the past two months. Not every outcome is perfect, but  at least we were able to get him off the streets, if only temporarily.

Paul is 63 years old, lived at the Oakland Hotel for five years and has  been homeless for the past couple months. Recently he wasn't  able to stand when he woke in the morning. He finally agreed to go to Summit Hospital where the doctors diagnosed severe arthritis aggravated by the cold nights outdoors. They transferred him to the Fruitvale Healthcare Center where we hope he will stay to have his health problems dealt with.

Update: Paul likes the Fruitvale Center and is happy there.

Kietly told us his brother brought him water every afternoon and that his case worker, Kathy, was looking for housing,but he was defecating in his bedding, urinating on himself, and not able to stand without help.

The Crisis Response Team sent him to Highland hospital where doctors discovered a large burn, up and down his side, possibly caused by a cigarette fire.

He is being held on a 5150 for 72 hours, but we are unable to track his progress and speak to a hospital social worker on his behalf so that he won't be re-released to this doorway due to patient confidentiality. 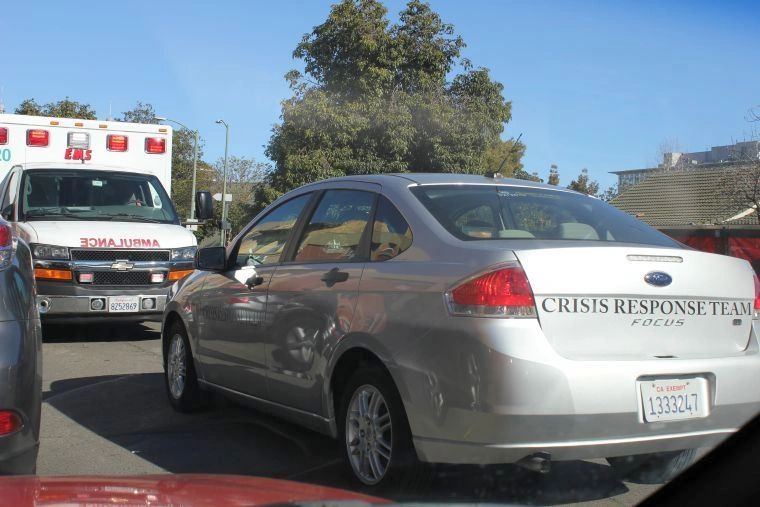 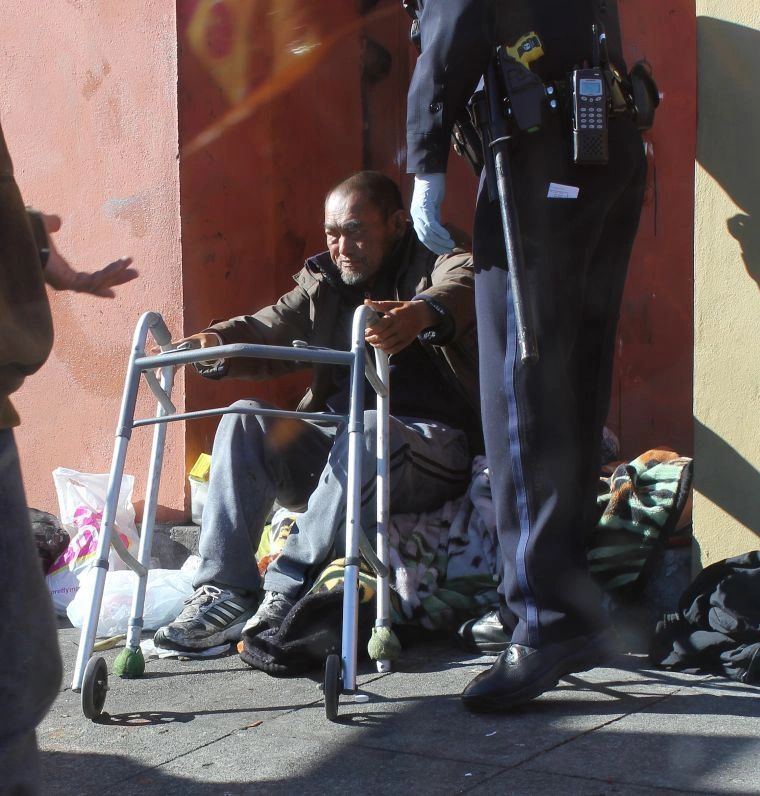 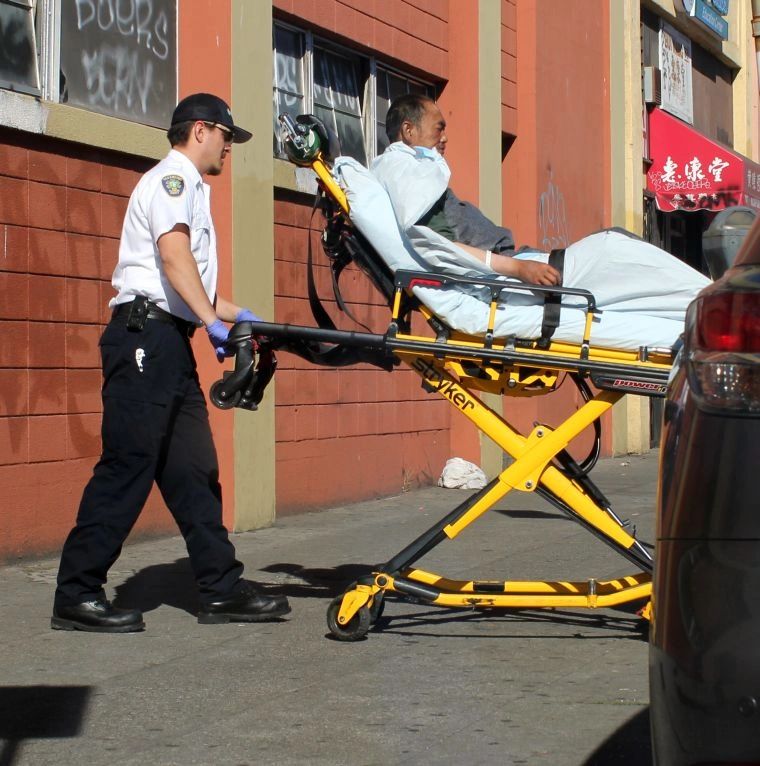 One of our volunteers,Dave, is trying to help Gregg get off the streets, worrying that he won't make it through another Winter.          October 2016

Lamont couldn't stand up, he was urinating and defecating on himself, and had several other health issues. Our volunteers, Crystal and Alex, took him to the hospital which started a relationship with social  workers.


Update: Lamont's health issues have been addressed, he is walking with his walker, in housing and off the streets.             December 2016

This is  Lilly...Lilly is a really special person. She was hit by a bus and  thrown across the street. When she opened her eyes, she saw the  paramedics. Lilly has been off the streets for about a year, she has  been sober for about the same. She is mostly wheelchair bound because of  the bus accident.

Quince is 68 years old, and has been homeless for at least a decade. We  are in the process of placing him into suitable housing arrangements. We  visit him every day, and administer life saving medication such as  insulin, as well as psych-meds.

Delphine  was dying on the streets with stage 4 kidney disease and glaucoma.  However, through our outreach, we re-connected her to her family, got  her off the streets, and off the vodka. We administer medication to her  daily, and ensure that she stays put. As a result, the doctors at the East Bay Nephrology Medical Group in Berkeley have pleasantly, and with much surprise, announced that her  physical condition has improved so much, that she is actually no longer  in mortal danger.    December, 2018

Eric is a  true success story. Once wandering the streets in a violent mania,  delusional, and paranoid. We have managed to stabilize him through  prescribed psychiatric medication which has enabled him to finally come  off the streets, and enjoy the stability of domesticity.    December, 2018

Ronald , 65 yrs. old, was found at Lafayette Square Park immobile on a  bench, and lying in his own feces. We cleaned him up, got him housing,  and through frequent visitation, keep him up and walking to prevent the  atrophy which had plagued him for so long.   December, 2018

J.D.  is deaf and unable to walk. We found him naked and sitting in his wheel  chair at a bus stop downtown. Our outreach managed to find him housing,  and we continue to visit him with a smile and the snacks that he  loves.               December, 2018

Dudley  is an old-timer, and is often camped outside the Police Department in  downtown Oakland. We have been working with him for years, providing him  with blankets, food and warm clothing. His mental illness has posed a  bit of a problem as far as housing, but we are hoping that with time,  things can change for this gentleman. Every individual is unique, and  requires a careful and selective methodology of support.                December, 2018

Copyright © 2020 Mission for the Homeless, Inc. - All Rights Reserved.